What can we say about New Orleans that hasn’t already been said? People mostly describe New Orleans in terms of its the extensive food and drink scene, tumultuous history, or music heritage. Collectively all these things create a vibrant culture that’s unique from any other U.S. city. New Orleans is number one on The New York Times 52 Places to Go in 2018 so we decided to plan a girls weekend getaway to see what all the fuss was about. See below for our three-day introduction to the city!

Where we stayed: Lower Garden District for the convenient location, quieter vibes (compared to the infamous French Quarter), and great shopping scene.

The number one way to kick off a girls trip? Brunch! We started our vacation at Surrey’s Cafe and Juice Bar which is a funky and vegetarian-friendly eatery on Magazine Street (did I mention we have the challenge of collectively feeding 3 omnivores, 2 vegetarians, 1 lactose intolerant vegetarian, and one part-time vegetarian in New Orleans?).

Brunch provided the fuel we needed to explore the Garden District and Magazine Street, which is littered with adorable shops and cafes. If you walk off Magazine Street you will come across some stunning homes, many of which have been inhabited by celebrities and used for filming famous shows and movies (American Horror Story, Benjamin Button, etc.). You can easily find guided or self-guided Garden District walking tours online if you want a more structured approach to exploring the neighborhood.

After drooling over homes we couldn’t afford, we stopped at District Donuts on Magazine Street for some well-deserved treats.

Next, we visited Lafayette Cemetery because visiting cemeteries is actually a thing people do in New Orleans. The cemetery is about the size of one city block and has been active since 1833. The cemetery is the most filmed one in New Orleans (CW’s The Originals, NCIS, a New Kids On The Block music video lol). Anne Rice also staged her funeral here.

We then went back to our Airbnb to relax and get ready for dinner. Dinner was a quiet affair at Emeril Lagasse’s Meril, located in the Warehouse District. Although this restaurant is described as Emeril’s casual restaurant, we were the only ones in leggings and jeans. However, the food was super affordable and delicious!

Our morning began with an essential coffee run at HiVolt Coffee. We then ambitiously walked to the Irish Channel neighborhood for brunch at Atchafalaya, a charming restaurant within a creole cottage. 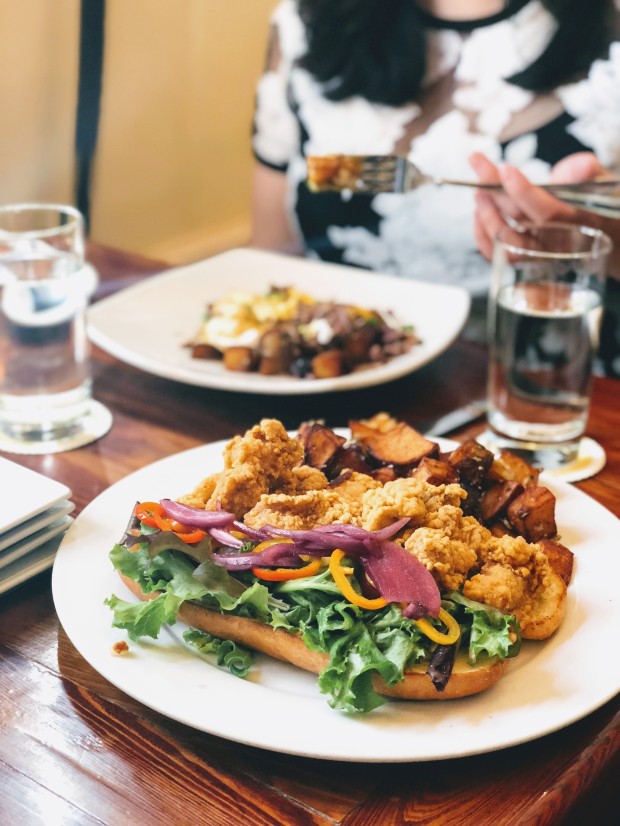 After brunch, we finally made our way to the French Quarter for a ~free~ walking tour by Free Tours by Foot. This was a great way to learn some New Orleans history and get a better understanding of the city’s layout. 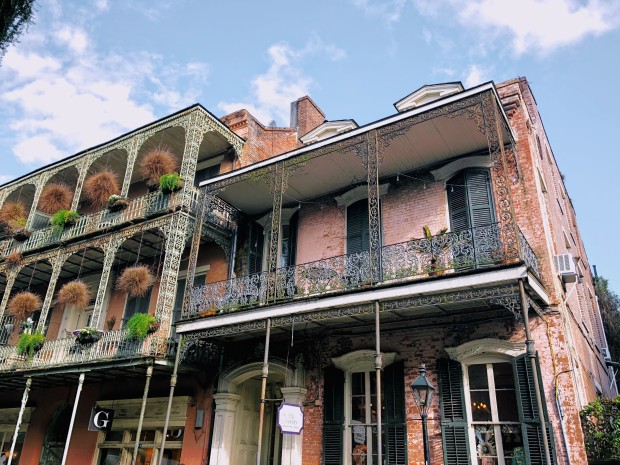 While in the French Quarter we made our necessary stop at Cafe du Monde because every single person (from friends to strangers) told us that we had to go here. Unsurprisingly, the line for a table and the line at the to-go window was ridiculously long, but the beignets lived up to the hype! 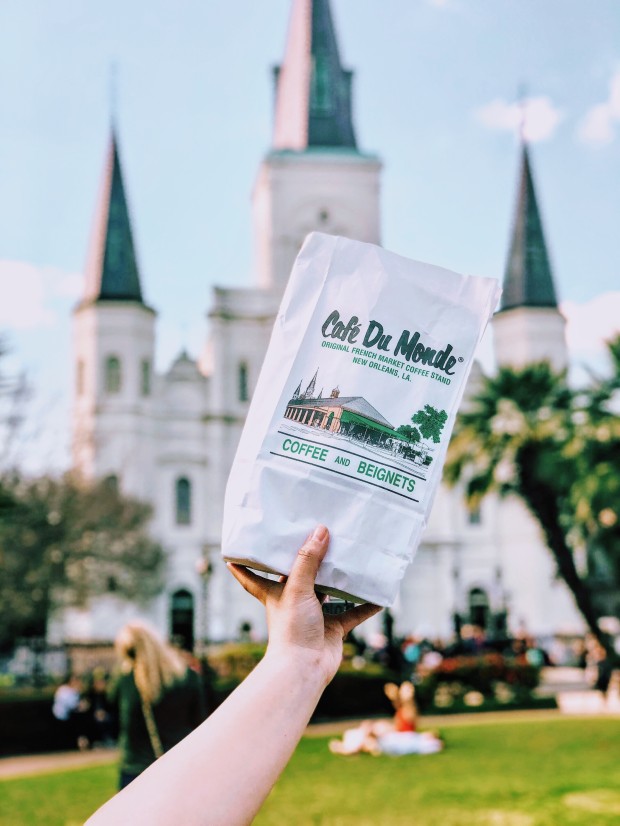 Our second evening in New Orleans was spent on Frenchmen Street which is known for its music and jazz clubs and as the local alternative to Bourbon Street. We kicked the night off with dinner and music at Marigny Brasserie. We also tried the famed Sazerac cocktail which is basically a New Orleans version of a whiskey cocktail and boy does it serve a punch (it was a one-and-done situation). After dinner, we went on to explore Palace Market which is an outdoor night market with local art.

Next up was The Spotted Cat Music Club to take in some jazz music. After a couple of sets we left The Spotted Cat and walked along Frenchmen to enjoy some street music before walking towards Bourbon Street to ~experience~ the scene (aka we walked through it, saw it, and called it a night).

Our last full day in New Orleans began once again with the essential coffee run but this time we went to Mojo Coffee. We then walked from Lower Garden District through downtown and onto Canal Street for brunch at The Ruby Slipper Cafe.

From brunch we headed back into the French Quarter for a more laid back exploration of the neighborhood. We shopped, took too many photos of cute buildings, watched street performers, and tried suspiciously cheap hurricanes. Side note–we never thought we’d be drinking rum beverages in front of an Andrew Jackson statue. 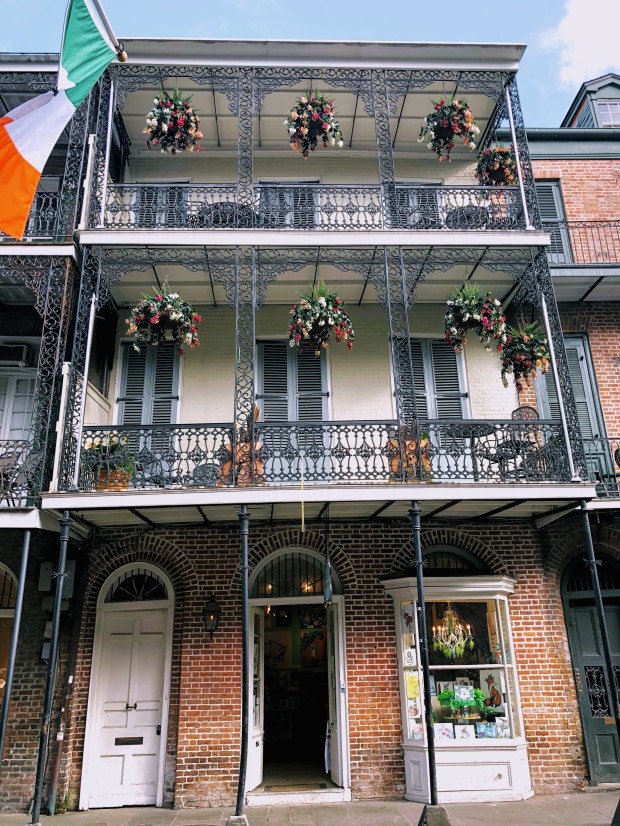 We then went on to Kingfish for some happy hour specials before watching an evening parade. As most people know, New Orleans loves to throw a party, so make sure you look up any events or parades for when you’re in town. We just happened to be on the parade route for the St. Joseph’s Day Parade and it was a fun experience! We ended the evening with dinner at Killer PoBoys and a second round of beignets from Cafe du Monde.

And that covers our three days in New Orleans! We all agree that it’d be great to go back and explore parts of the city we weren’t able to get to. What did we miss that you’d consider essential New Orleans?